Did you know that LED lights make a great choice for Christmas cheer? You might already know that LED Christmas lights can save you money, but they actually have several benefits. Read on to find out why you should consider using LED bulbs for your Christmas decorations this year. 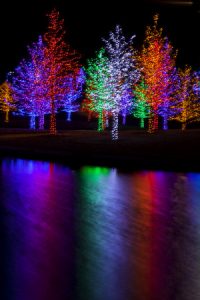 They’re good for the environment

An average LED light string consumes less than 5 watts of power, compared with 20 for an average incandescent string. This helps conserve natural resources and reduces the amount of pollution produced by power plants. Not only will your home look beautiful, but you’ll have the satisfaction of going green as well.

While no bulb can last forever, LED Christmas lights have between 25,000 and 75,000 hours of lifetime, which means you can expect to get through six to eight hassle-free holiday seasons.

Some people balk at the initial cost of LED Christmas lights, which do tend to cost more than incandescent bulbs. However, you’ll save as much as 33% on your electric bill, causing the costs over time to be less with LED lights.

They’re cool to the touch

Handled improperly, you can get a nasty burn from incandescent Christmas lights, as anyone who’s had an accident putting them up can testify. LED bulbs, however, are cool to the touch, making it pain-free to handle them.