In our last post, we discussed LEDs at Christmastime, including the 45,000 LED lights used on the 76-foot Christmas tree at NYC’s Rockefeller Center as well as one author’s suggestion that we should give LED bulbs as presents this holiday season. For those reasons alone, it is easy to see that LEDs are taking over this holiday season, which is a good thing, as typical Christmas lights can be energy wasters.

In the article, “LED holiday lights really are quite efficient,” Brian Palmer of the Washington Post asks, “So, should you trash your old holiday blinkers for their LED counterpart?” This is a poignant question, especially heading into the New Year. Holiday lights use an enormous amount of energy. This should come as no surprise. Neighborhoods from coast to coast look like they’re on fire this time of the year!

While this is tender, heartwarming and beautiful to look at, these lights account for roughly 2.22 terawatt-hours of energy use per year in America. To give you a clearer understanding of this, around 200,000 homes consume that much energy! That is many people, many families! Energy usage should go to these homes, not old-fashioned Christmas lights. What about that Christmas spirit though? That alone illuminates and powers up the soul. Can we do it in a responsible and energy-efficient manner? 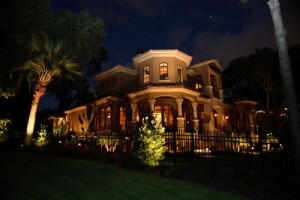 It would be an understatement saying that the world is going through a bit of an energy crisis (it always is) and given the inconsistent state of the economy, we really shouldn’t be wasting any energy. Because of this, Palmer believes we should make that switch to Christmas LEDs. He writes, “A new strand of LEDs will last four or five decades, possibly the rest of your life, depending on how long you leave them on (and how long you live).” Like any other Christmas tradition, LEDs can be passed down to your kids and grandkids. Doesn’t get much more Christmas-y than that, wouldn’t you say?

At Illuminations USA, we encourage an energy-efficiency holiday season.  Energy-efficiency is the first step to happiness! Just ask our happy customers in Central Florida.